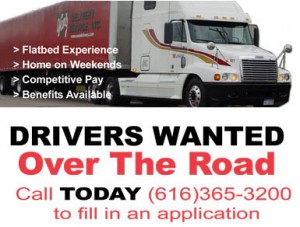 GRAND RAPIDS, MI – Many West Michigan trucking companies are experiencing part of a nationwide trend: a rising need for more drivers to keep on truckin.’

According to an article from USA Today, companies nationwide have seen a shortage of truck drivers, leading to increasing freight rates and delays in some deliveries.

Walter Heinritzi, executive director of the Michigan Trucking Association, said there has been a modest uptick in the overall economy, leading to an increasing amount of raw materials and finished products and a rising demand for truckers to haul them.

On top of that, Heinritzi said trucking companies are getting squeezed as many older truck drivers retire and standards have increased to find qualified people to replace them.

“That itself creates a shortage,” he said.

Josh Rhodes, safety compliance director with Grand Rapids-based Ever Fresh Transportation, said he works at the West Michigan CDL Truck Driving School and has noticed hundreds of positions opening across the country for drivers who have completed training. For candidates with good driving histories and clean criminal records, there’s a lot of opportunity in the industry.

“There’s a driver shortage and it’s only going to get worse,” Rhodes said.

Rhodes said Everfresh employs between 105-110 drivers, a number that has been rising in recent years. The company currently is looking to hire about 10 two-person driver teams.

He attributed part of the rising amount of openings nationwide to the gradually improving economy. The tonnage hauled by truck carriers increased about 3.8 percent between May 2011 and May 2012, according to numbers from the American Trucking Association.

On top of that, it’s become more difficult for truck driver applicants to be certified under newly heightened safety and medical standards, he said. The Federal Motor Carrier Safety Administration has passed stiffer Compliance, Safety and Accountability initiatives in recent years, allowing companies to see more in-depth driving and inspection records for those who apply for jobs.

Heinritzi said candidates with poor driving records or criminal violations, such as drug use, won’t qualify for trucking positions.

“The average age of drivers is in the upper 50s – there’s not enough younger guys coming into the industry to fill those positions,” Rhodes said. “It’s tougher to find qualified candidates.”

Sharon Conklin, safety director for Van’s Delivery Service in Grand Rapids and a member of the West Michigan Safety Council for the Michigan Trucking Association, said the increasing CSA regulations have benefited the company, even though it can take longer to find qualified candidates.

Van’s employs 56 company drivers and 70 owner-operators and currently is looking to hire about five new drivers, Conklin said, noting many of the applicants she receives have come from middle-aged men and women who have lost other jobs and receive grants to go to trucking school.

“We’re not filling the trucks as quickly,” she said. “We would rather have a good driver with a good work history.”

Conklin said Van’s has seen a 24 percent turnover rate in truck drivers during the past two years – low compared to national standards. Rhodes could not provide specific numbers, but cited low turnover at Everfresh as well.

“Even our over the road drivers get home weekly,” Conklin said. “We do maintain our drivers.”

As positions for truckers continue to grow, companies are searching for qualified candidates to fill them.

“It’s a shortage of quality drivers,” Conklin said of the national need for truckers.

Article by By Megan Durisin | MLive.com